Do you have a bra with a band that’s just a little too tight? Or maybe your bras feel uncomfortably snug during part of the month? Or you’re between sizes and always have to choose between wearing bras that are too tight or too loose? I’ve noticed that one brand of lingerie in particular seems to run small in the band sizes, so even though I’ve bought the correct size according to the tag, my ribs will ache after a day of wearing them.

Here’s a very simple fix that will make a tight bra larger, and it works on all hook-and-eye bras that close in the back. (This hack is not for front-closing bras, or bras without fasteners such as sports bras.) The best part is that you can unclip the DIY bra band extender so that you can use it to make several different bras bigger, or just add it temporarily if you only need the extra length for one time of the month (or during a pregnancy). And since the extender is adjustable, you should be able to use it to find a perfect fit on multiple different bras. (Note: I’ve also fixed bras with bands that were too large, using a method similar to this tutorial that was posted on AllFreeSewing. If you need to make a bra band smaller, click the link and then look for the part that says “click here for sewing pattern”).

After a quick search, I found that you can buy these ready-made bra extenders on Amazon. But I’m going to show you how to make your own extender by starting with a worn-out bra, and it only takes about two minutes.

I am using different colors of bras in the pictures: the red bras are the worn-out ones that I am using to show you how to make the extender. And the gray one is the one that needs a larger band size. I’m also using contrasting thread so that you can see what I’m doing. I’d recommend using matching thread, but it really doesn’t matter that much, because nobody makes a bra band extender as a fashion statement!

Take a look at the hooks on the back of a worn-out bra, and you will notice that the metal hooks and eyes are attached to sturdy pieces of fabric that are sewn to the stretchy part of the bra band. Cut off the sturdy pieces of fabric that have the fasteners on them. (If you want to, you can use a seam ripper to cut the stitches, but you really don’t need to bother. Just cutting the bra band is fine.)

Now sew the hook piece to the eye piece, making sure that the hooks are facing the right way. Take a look at the pictures to make sure that you aren’t sewing the hooks on facing backwards, or else you won’t be able to hook it onto your bra. If the eyes are facing up, the hooks need to be facing down.

You can hand-sew the pieces, and since it’s a small seam it only takes a minute or so. Sew into the hook side, then the eye side. Do this over and over, sewing all the way down the joint in a zigzag pattern, until the two fastener pieces of the bra are securely attached to each other.

Or you can use a sewing machine with a zigzag stitch: butt the two pieces of fabric up next to each other, with the hooks facing up so that you don’t scratch your sewing machine (but the eyes need to be facing down! Make sure you have the two pieces oriented correctly, as shown in the pictures above). Sew with a zigzag stitch, catching one piece when the machine zigs, and the other piece when it zags. You may want to sew over the joint a couple of times, to make sure that the two fastener pieces of the bra are securely attached to each other.

When you’re done, it should look something like this. Now you just need to clip the DIY extender onto a bra that’s too tight, and you’ve fixed it!

Since the extender and the bra itself will both have several different sets of eyes, you have quite a few places you can fasten the hooks in order to find a perfect fit. (Wondering what those white dots on the bra strap are? That’s how I keep bra straps from slipping off my shoulders!)

If you need to add more length than just adding the bra fastener pieces, you can sew a scrap of fabric in between the hook and eye pieces to make a longer extender. You can add up to about 3 inches (7.5 cm) of extra room to your bra band this way, without altering the fit of the rest of the bra very much. If you try to add much more than that, you will probably find that the straps move too close to your armpits in the back, and the bra won’t be very comfortable. So if your bra is more than 3 inches too tight, then likely the size is so wrong that you will need to get fitted for a bra that is a better size for you.

Most of the projects on my blog are ones that I came up with, but this bra band extender is actually something my older sister showed me how to make when I was a teenager. So I’m giving her a shout-out here because it was a great idea!

I hope you found this fix useful! Give it a try today, or pin this idea for later. And remember, life is too short to wear uncomfortable underwear!

I am an artist and fashion designer with a passion for helping people bring their own creative dreams to life. I love sharing my projects with fellow crafters, and I hope you find ideas and inspiration on my blog! As an Amazon affiliate, I earn a small commission (at no extra cost to you) if you use my affiliate links to make a purchase. 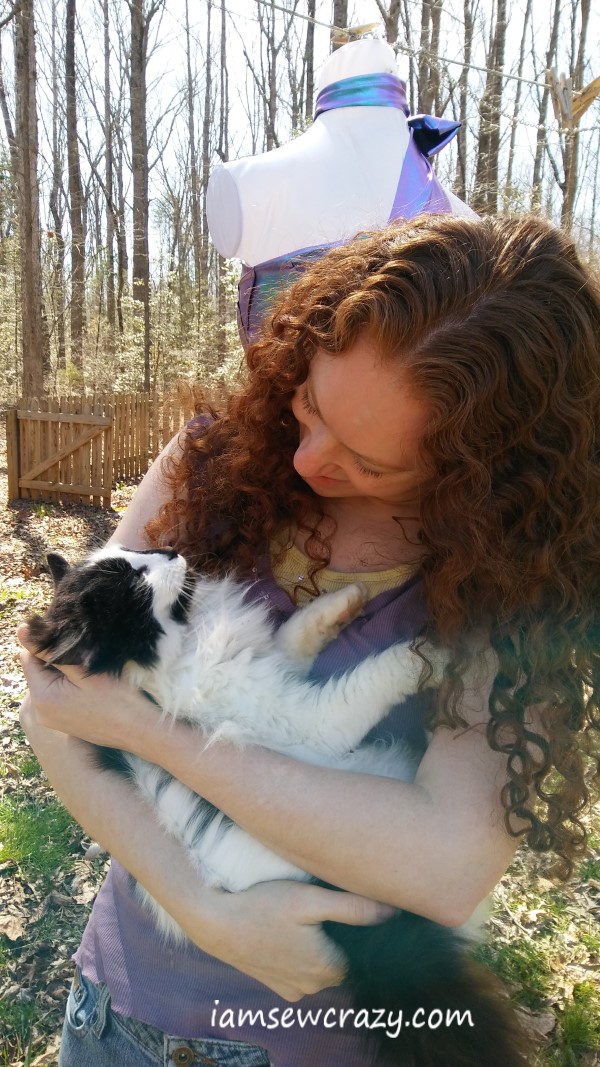 Have my tutorials, printables, and free patterns helped you? Drop a fiver in my PayPal tip jar if you'd like to say thanks!